Thoughts and musings from a writer, editor, photographer, activist, and musician in Edmonton, Alberta, Canada. I believe that faith and social action are intertwined in efforts to positively motivate change in the society around us. We need to be actively involved in our communities to try to effect this change locally and globally. I also love the local Arts scene. Warning: alternative perspectives and strong opinions ahead. Intimidated yet? Good - read on.

I was invited to be the guest speaker and performer at the Unitarian Church of Edmonton for its quarterly "Social Justice Sunday" on October 28, 2018. The topic was "A Safe Space for Activism." Below is a video of my talk and performance of four songs, as well as my notes. I ad libbed a bit in my...
Published at Sacred Social Justice
#HateFreeYEG Lanches
Posted 10/1/2018 6:35 PM

#HateFreeYEG is a new grassroots community initiative to work towards eradicating Edmonton of hate and racism. The initiative launched on September 30, and I was asked to speak at the launch as a community organizer about how we can eliminate hate, as well as my own experiences with anti-Semitism...
Published at Sacred Social Justice
Families Belong Together
Posted 7/2/2018 10:37 AM

I helped organize the #FamiliesBelongTogether solidarity rally in Edmonton on June 30. Here is my speech and a video of my introductory words and chants. -- Thank you for coming this afternoon. We respectfully acknowledge that we are located on Treaty 6 territory, a traditional gathering place fo...
Published at Sacred Social Justice
Vegging Out: Margherita Pizza at Die Pie
Posted 4/29/2018 11:30 AM
Margherita pizza - but vegan. The "cheese" is made from cashews. #yeg #diepie #yegfood #yegeats #foodporn #plantbased #vegan A post shared by Paula E. Kirman (@livingsanctuary) on Apr 19, 2018 at 3:34pm PDT It's no secret that cheese and I don't get along well. I don't like it's flavour...
Published at Sacred Social Justice
Just Desserts: Bubble Tea & Egg Puff at Teapsy Cafe
Posted 4/29/2018 11:27 AM
Bubble milk tea and an egg puff. #yegfood #yegeats #whyteave #nomnom #bubbletea A post shared by Paula E. Kirman (@livingsanctuary) on Apr 28, 2018 at 12:39pm PDT I had to kill some time on Whyte Avenue and stopped in to Teapsy Cafe for a cold drink on the first hot afternoon of the season. I o...
Published at Sacred Social Justice
Speech: International Day for the Elimination of Racial Discrimination
Posted 3/21/2018 4:39 PM
I was invited as a guest speaker for the first annual student conference for the International Day for the Elimination of Racial Discrimination on March 21 at Balwin School (Belvedere School also participated). The event was organized by Chris Nielsen, MLA Edmonton-Decore. Below is my speech, whi...
Published at Sacred Social Justice
Presenting at the NDP Federal Convention 2018
Posted 2/17/2018 10:31 AM
March On Canada was invited to give a workshop on grassroots, cross-country organizing at the 2018 NDP Federal Convention in Ottawa. I recorded a video that was included in the presentation, about organizing the women's march in Edmonton in 2017 and 2018, as well as Completing the Story, a partne...
Published at Sacred Social Justice
Documenting Activism at International Week
Posted 2/3/2018 9:35 AM
I was invited to present Documenting Activism during the University of Alberta’s International Week 2018. I have posted my notes and a video of the presentation at my main website, Words, Pictures, Music.
Published at Sacred Social Justice
View More
Visit this blog Subscribe to this blog 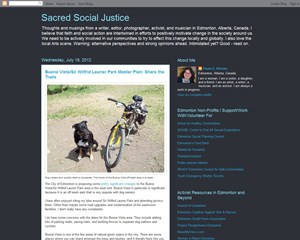