Conservative activist Pam Davidson running in Alberta’s Senate Nominee election
Posted 7/5/2021 8:59 PM
Conservative Party activist Pamela Davidson has announced her plans to run as a candidate in Alberta’s Senate Nominee elections on October 18, 2021. On her website, Davidson describers herself as a staunch advocate for property rights and supporter of law-abiding firearms owners. Davidson has mad...
Published at daveberta.ca
Sabrina Grover nominated as the Liberal Party candidate in Calgary-Centre
Posted 6/21/2021 5:43 PM
Sabrina Grover has been acclaimed as the federal Liberal Party candidate in Calgary-Centre, according to a notice posted on the party website. Grover is a Senior Policy and Advocacy Officer Nutrition International and Principal of Provoke Public Relations. Grover was active in Alberta’a Progressi...
Published at daveberta.ca
Heather Eddy running for NDP nomination in Calgary-Klein
Posted 6/21/2021 11:05 AM
Heather Eddy has announced her plans to seek the Alberta NDP nomination in Calgary-Klein. Eddy was the Director of Human Resources for Suncor from 2009 to 2015 and currently runs her own independent HR company. “I want to champion job creation in the energy industry and all industries,” Eddy said...
Published at daveberta.ca
Former UCP nomination candidate hit with a $9,000 fine from Elections Alberta
Posted 6/17/2021 9:18 PM
Elections Alberta is reporting that it has issued a $9,000 fine against former United Conservative Party nomination candidate Jeff Walters for violations of two sections of the Election Finances and Contributions Disclosure Act. The violations are reported to have taken place Walters’ bid f...
Published at daveberta.ca
Federal Liberals choose Devon Hargreaves as their candidate in Lethbridge
Posted 6/17/2021 7:52 AM
Devon Hargreaves has been nominated as the Liberal Party of Canada candidate in the federal district of Lethbridge. Hargreaves was the Liberal candidate in Lethbridge-East in the 2019 provincial election. He is the past Chair of the Lethbridge PrideFest and, in 2018, launched an e-petition to ban...
Published at daveberta.ca
Randy Boissonnault planning a comeback in Edmonton-Centre, Erika Barootes launches Senate Nominee campaign
Posted 6/15/2021 8:18 AM
Randy Boissonnault announced plans to try to make a political comeback by seeking the federal Liberal Party nomination in Edmonton-Centre. Boissonnault was elected as the Liberal MP for the district in 2015 and served Parliamentary Secretary to the Minister of Canadian Heritage and special adviso...
Published at daveberta.ca
Episode 76: Radical Alberta politics and propaganda in the 1930s
Posted 6/13/2021 3:46 PM
Andrea Hasenbank joins the Daveberta Podcast to discuss radical politics and propaganda in 1930s Alberta, one of Dave Cournoyer’s favourite periods in Alberta politics. From the rise of Communist organizations and publications to the election of William Aberhart‘s Social Credit Party,...
Published at daveberta.ca
Jason Kenney is having another bad week
Posted 6/9/2021 10:12 PM
When a politician repeatedly tries to gaslight his opponents and the media, deny what is perfectly obvious in a photo, refuse to apologize and then after five days only offer a non-apology when faced with a cabinet and caucus revolt, their credibility becomes damaged when the next scandal breaks ...
Published at daveberta.ca
More turmoil in Kenney’s Caucus: UCP MLA Richard Gotfried resigns as chair of the Calgary Caucus and criticizes “hypocrisy” in government leadership
Posted 6/7/2021 7:54 AM
Calgary-Fish Creek MLA Richard Gotfried is the latest member of the United Conservative Party Caucus to publicly criticize his party’s leadership. According to a statement and comments on Facebook, Gotfried resigned as chair of the UCP’s Calgary Caucus last Thursday so that he can hav...
Published at daveberta.ca
Kenney’s reaction to boozy Sky Palace patio party photos sparks another UCP Caucus rebellion
Posted 6/5/2021 10:23 PM
Any appearance that Premier Jason Kenney had regained control over his United Conservative Party caucus three weeks ago when rebel MLAs Drew Barnes and Todd Loewen were ejected was shattered this weekend. A handful of UCP MLAs, including two cabinet ministers, are now publicly calling on the Kenn...
Published at daveberta.ca
View More
Visit this blog Subscribe to this blog 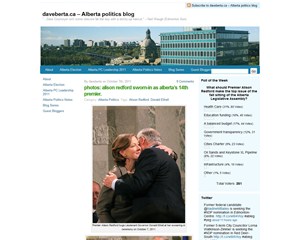